“Biomimicry does a great job at protecting recently planted vegetation from sand blasting, allowing it to flourish.” 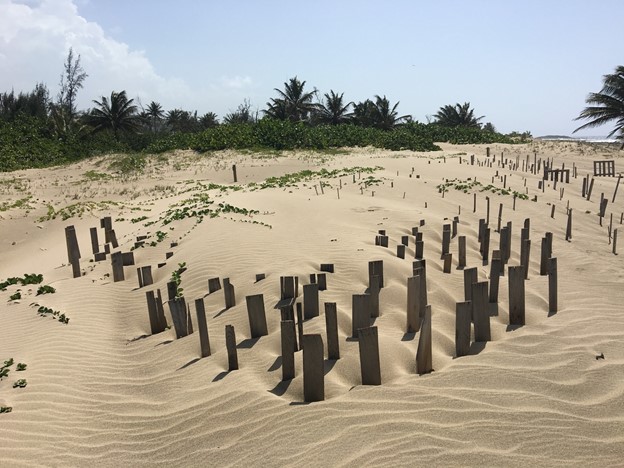 Dunes provide protection to communities and habitats throughout Puerto Rico’s municipalities, with approximately 48 percent of the island’s dunes found on the north coast in Isabela, Dorado, and Loiza. The once expansive dune systems are now extremely fragile due to the destruction of vegetation and sand compaction by all-terrain vehicles, illegal sand extraction by the construction industry, and heavy foot traffic. With the loss of vegetation, the dunes are more susceptible to erosion and to the displacement of sand during storm events. These changes have also altered habitats, making way for invasive species such as the green iguana, which feeds on sand-stabilizing vegetation.

In addition to the dunes being affected by human activities and invasive species, Puerto Rico was hit in September 2017 by Hurricanes Irma and Maria. In March 2018, winter storm Riley brought additional impacts. The storms resulted in near record-breaking high tides and coastal flooding that caused severe erosion, breaching, and flattening of many dunes on the north coast. The combined effects of rain runoff and wave action destroyed and breached some primary dunes.

Addressing the Impacts through Dune Restoration

Historically, hard structures such as “rip-rap” have been used to protect shorelines along the Puerto Rico coast, but have now been found to disrupt the flow of sand and exacerbate erosion on adjacent shorelines. Dr. Robert J. Mayer, founding director of Vida Marina, the Center for Conservation and Ecological Restoration at the University of Puerto Rico at Aguadilla, notes that “investments in infrastructure should not jeopardize the ecosystems and natural resources that underlie economic wealth and human well-being. Built infrastructure is strongest the day it is built, but often grows weaker with time and requires more maintenance than natural and nature-based infrastructure.”

Robert and his team are testing restoration approaches to help address the issues affecting Puerto Rico’s dune systems. His work focuses on ecological restoration projects that not only provide storm damage protection, but also reduce foot traffic and other erosion issues, creating resilient dune systems. This work is done through Vida Marina, where Robert and his team are currently prioritizing sites affected by extreme weather.

Their restoration projects have five steps

To get started, they selected 23 sites along the north coast of Puerto Rico, focusing on highly populated areas that are located behind coastal dunes impacted by extreme weather. They began working through their restoration steps by collecting aerial imagery, analyzing each site from the ground and air, monitoring vegetation cover, analyzing conservation threats on each site, and identifying nature-based infrastructure to increase resilience and provide critical services to communities in a cost-effective manner.

Robert and his team then made recommendations for ecological restoration courses of action at each site. These included the following:

“One day we came across a great idea for trapping sand, and we immediately gave it a try,” Robert says.

This method became known as “biomimicry”—a technique that uses matrices created with pieces of wood to generate turbulence and reduce wind velocity, resulting in the uniform accumulation of sand that is resistant to storm surge and strong wave action.

“Biomimicry,” Robert says, “does a great job at protecting recently planted vegetation from sand blasting, allowing it to flourish.”

The technique is now attracting interest among graduate students at the University of Puerto Rico, thus expanding Vida Marina’s capacity to employ biomimicry around the island. Kindergarten through twelfth grade students are also using this technique in science fair projects. Student volunteers of all ages also helped with restoration, which gave them the “green contact hours” required for graduation. 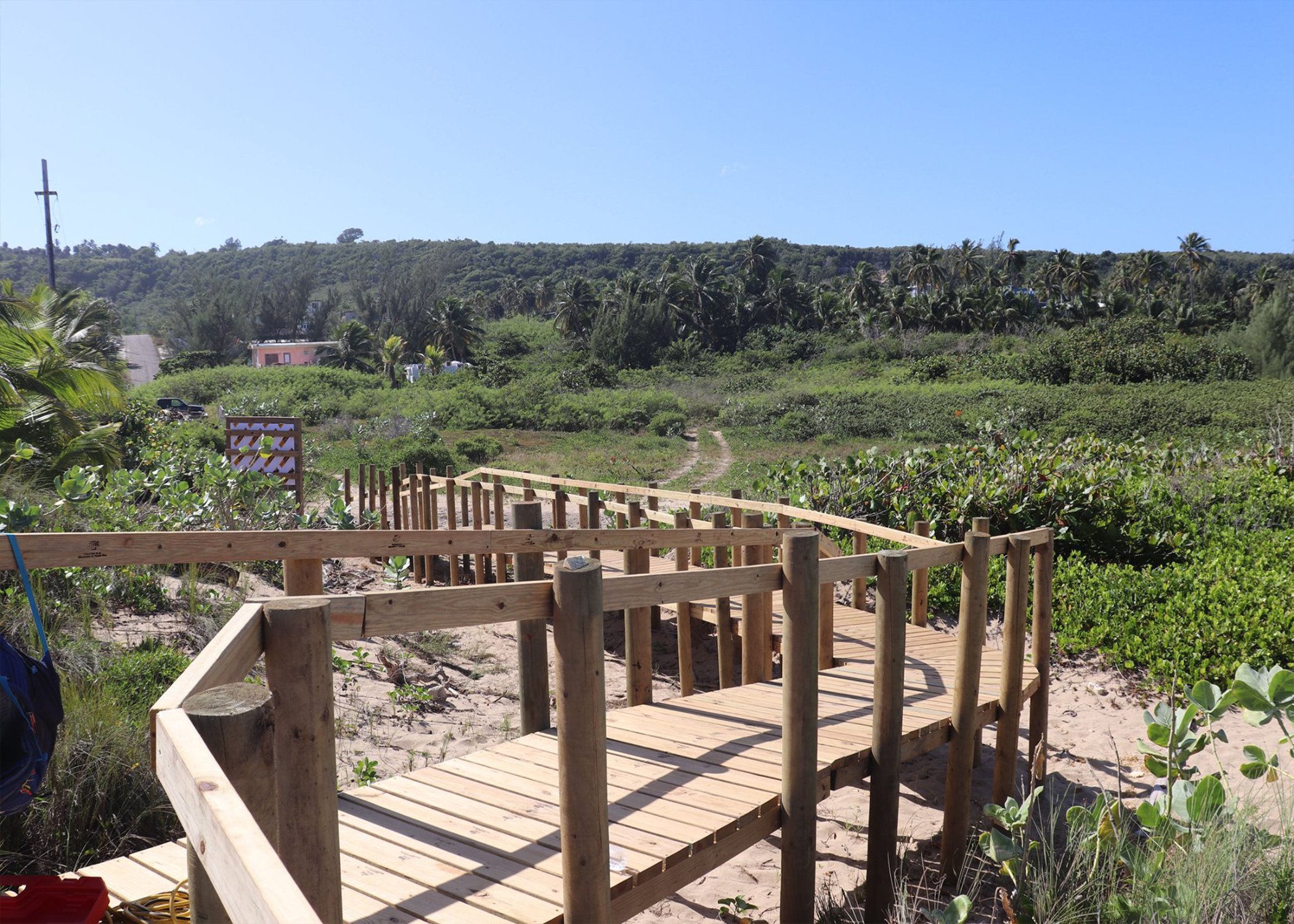 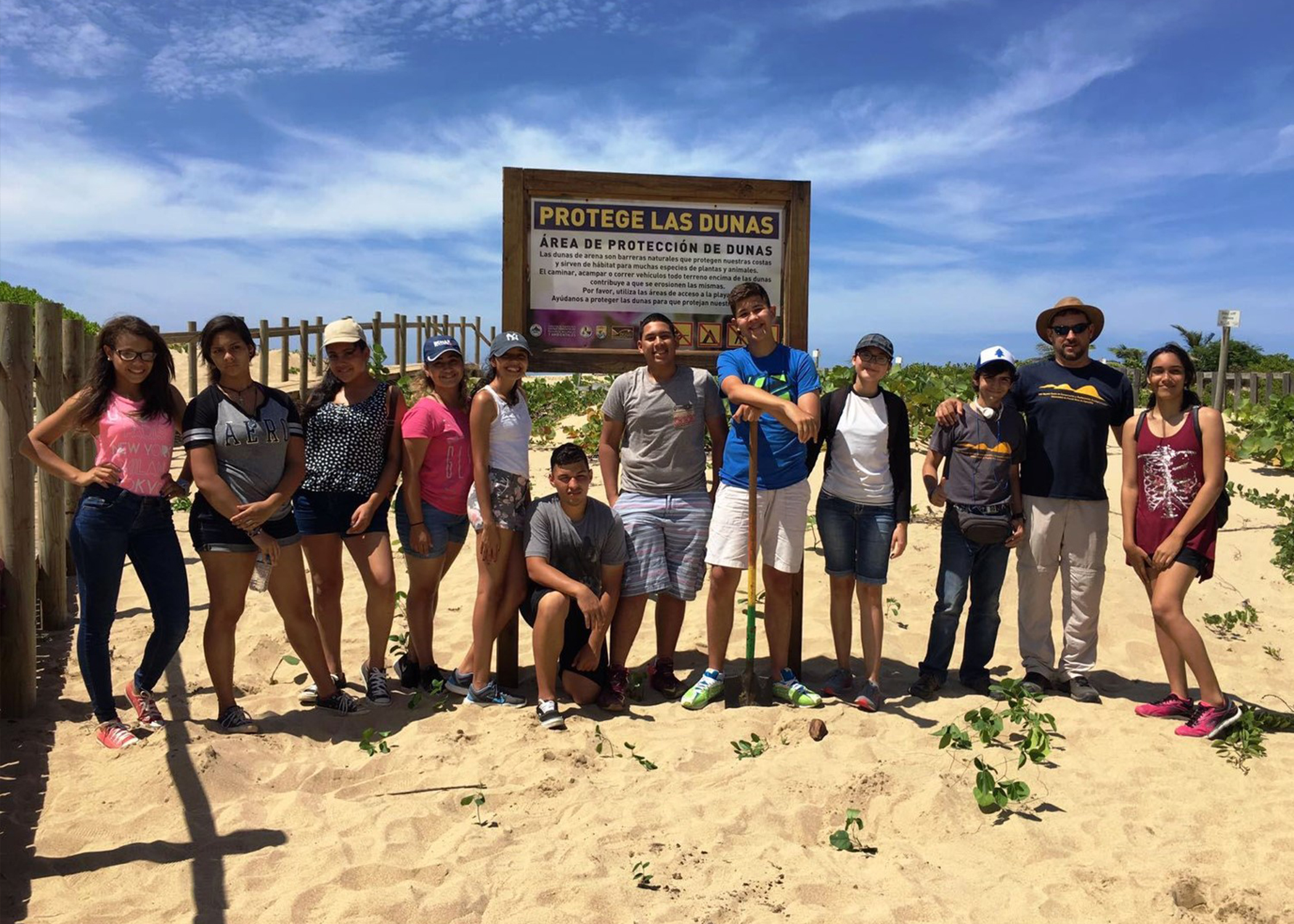 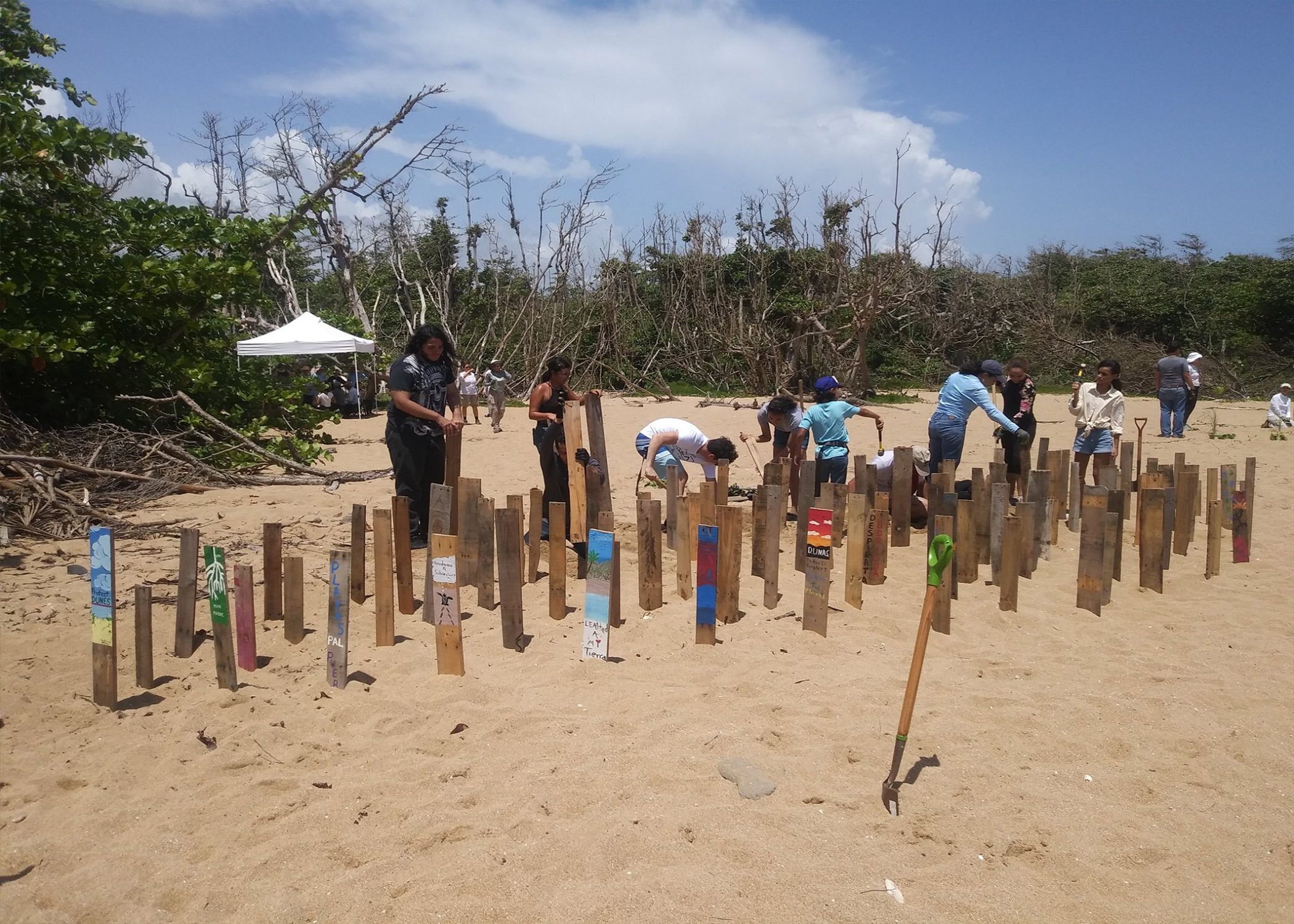 Many of the biomimicry matrices installed by Robert and his team have been rebuilding dunes that were affected by Hurricanes Irma and Maria and winter storm Riley. Robert’s team is continuing to spread the word about the importance of dune restoration by working with the University of Wisconsin – Madison Arboretum's Earth Partnership Program on environmental education efforts. They also offer talks in schools all over the island, year round.

Vida Marina will be continuing this work with the restoration of additional dune sites as a collaboration with the University of Wisconsin – Madison. This work will be funded by the National Fish and Wildlife Foundation’s 2019 Coastal Resilience Grant.