Dune restoration is not only helping to protect transportation infrastructure from current and future flooding, but is also increasing public access to a popular beach and providing enhanced habitat for plants and animals. Evyan Borgnis Sloane, with the California Coastal Conservancy, walks us through this innovative solution to climate change challenges that provides protection from sea level rise and storm surge. 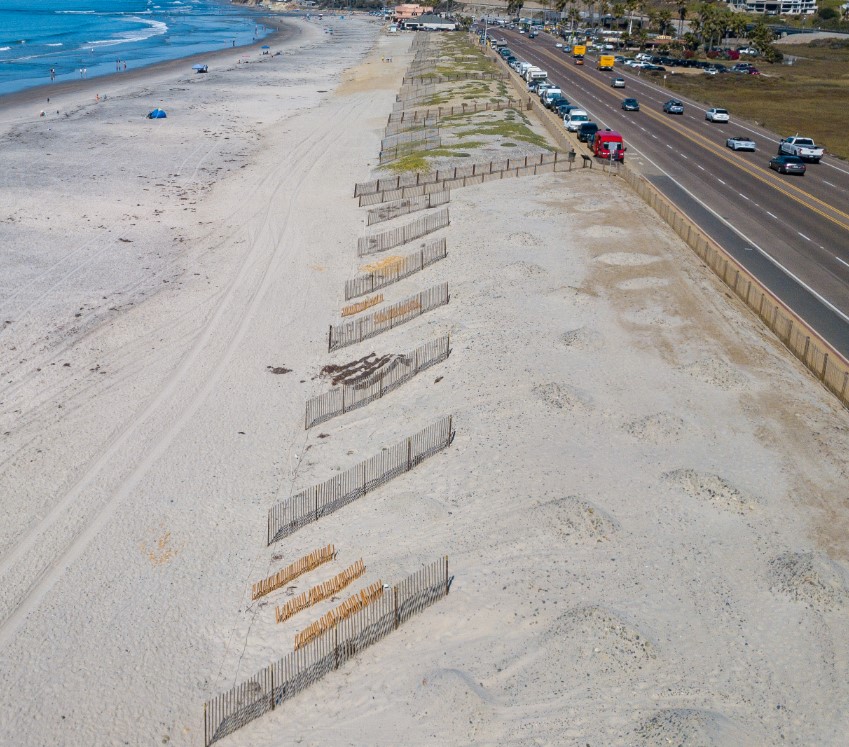 The City of Encinitas, California, owns the portion of the Pacific Coast Highway that runs through it and is responsible for its operation and maintenance. As a result, the city was looking for a way to protect the highway from flooding and storm surge. A dune restoration project in Cardiff Beach State Park is now providing natural flood protection—the dunes are helping to reduce flooding and erosion from storm surge and sea level rise. The project has also increased public access and enhanced wildlife habitat for sensitive plants and animals.

The project lowered and buried the existing rock revetment to serve as a last line of defense while this pilot strategy is being tested. The design aims to have the dunes protect the road from overtopping and flooding, while the rock keeps the road intact (reducing erosion and undermining) if the dunes get washed away.

Evyan Borgnis Sloane served as the project manager, providing technical expertise and oversight for the restoration. Evyan works for the California Coastal Conservancy and specializes in coastal habitat restoration. A large part of her team’s job for this project was to communicate the benefits of restoring the dune system using natural approaches. Evyan knew she would have to address the community’s interests.

“This is a really popular beach, and access was not good,” Evyan points out. And while the city initially wanted to install more and bigger rock revetments to protect the highway from flooding, research showed that that approach would exacerbate erosion and decrease public access to the beach. Additionally, the state permitting agency has been trying to limit permits for sea walls or hardened structures.

“When we talked about increased public access through a pedestrian path and showed pictures of what the restoration would look like, city council got really excited,” Evyan says. The pedestrian path is constructed with Mobi-Mat (a flexible mat laid over the ground), which is Americans with Disabilities Act-compliant.

The team conducted a feasibility study, which included extensive site-specific storm and sea level rise modeling. Modeling results provided evidence that more protection was needed beyond the beach’s natural geology and the city’s revetment and beach nourishment projects. Without the project, the highway would experience frequent flooding and erosion from increasingly larger storm events and high rates of sea level rise projected by 2050.

The preferred project alternative was to create dunes by reconfiguring the existing rock revetment, adding rock where existing rock was not adequate to form a rock template. The project area spans about 0.5 mile of shoreline and covers approximately four acres. Sand dunes were constructed over the rock template using approximately 30,000 cubic yards of sand from the nearby San Elijo Lagoon inlet. “The mouth of the lagoon is dredged a couple times a year, so this was a great source for sand,” Evyan notes.

An interesting part of the state permit is that it requires monitoring and stipulates that if the dunes are overtopped multiple times a year, and the city can’t maintain the project, then they may need to raise or move the highway. The dune project is not meant to be a permanent solution but rather an adaptive management strategy that provides critical dune habitat now and protects until increased sea level rise requires different approaches. This type of project enables the city to act now to mitigate flooding, while looking for longer-term strategies to address future sea levels.

The project was completed in phases. It started in the winter, at the beginning of the rainy season, so precipitation and waves affected construction. The team also had to ensure that any western snowy plover nests in the area were not disturbed. Volunteers led the planting of vegetation, using both container plants and seedlings. Planting occurred in two phases because of the weather.

Site-specific modeling has demonstrated that the project will provide flood protection and native dune habitat, with no additional sand maintenance, until 2050. Although the project would not withstand projected levels of sea level rise and storms for 2100, sand from annual maintenance dredging of the San Elijo Lagoon inlet is expected to provide the sand needed to maintain the dunes and the fore beach beyond 2100.

The project is testing the effectiveness of dune restoration as a sea level rise adaptation strategy. There is currently a five-year monitoring program with the University of California, Los Angeles to analyze seasonal and event-based changes in the dune morphology. Monitoring will also help to inform the design of West Coast living shorelines. Additionally, Nature Collective will be leading biological monitoring, evaluating plant diversity, cover, and health, as well as bird use.

Interpretive signs describe which plants and animals are expected to return, while smaller signs ask visitors to stay off the dunes and keep to the trail. There are many outreach efforts occurring in the area schools and with community groups.

Part of Evyan’s job is to talk about the project and explain what the natural landscape provides. “People say it looks like an East Coast project, because they don’t think Southern California has dunes,” she says. “It gives me an opportunity to share that historically there were dunes here, but due to development, dunes have been taken away, and that we are restoring what was once naturally occurring.”

The total project cost was $3 million, including three years of monitoring.

Evyan shared some of the reasons for the project cost: high costs associated with moving rock, change orders due to needing more sand, construction during the storm season, and monitoring.

Funding was primarily provided by the California Ocean Protection Council (construction and monitoring) and the California State Coastal Conservancy (feasibility study, design, construction, monitoring, in-kind technical expertise, and project management). The California Coastal Commission also contributed funding for pedestrian path construction using violation fines for some of the funding, along with support from the City of Encinitas, San Diego Association of Governments, and U.S. Fish and Wildlife.