NOAA’s land cover program uses satellite imagery to document coastal land cover and how it changes over time. The following facts are based on the latest change data that is available on a national level—1996 to 2016. The area referred to as coastal is approximately 25 percent of the continental U.S. 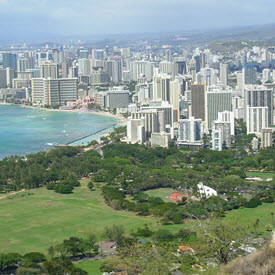 Tree cover in the coastal U.S. decreased by 9.6 million acres. Most tree loss was associated with forest management cycles, forest cutting, and regrowth (many of these areas will re-grow trees).

The coastal area of the U.S. is twice as developed as the rest of the country—8.8 percent, versus 4.09 percent of the interior. Additionally, land cover changes significantly faster in coastal areas—8.3 percent, versus 5.5 percent for the interior. Approximately 49.8 million acres—an area larger than Florida—underwent some sort of change between 1996 and 2016. During this period, 2.5 percent of the coastal area changed more than once.

Wetlands account for more than 15 percent of the total coastal continental U.S.—approximately 75.5 million acres (118,000 square miles). 640,000 acres (1,000 square miles) of wetlands were lost between 1996 and 2016, much of which were freshwater forested wetlands being lost to development.

Much of the country has undergone land cover change in the past 20 years. Below is a sampling of some notable coastal states’ land cover statistics (as of 2016), as well as changes from 1996 to 2016.

Over a quarter of coastal Alabama changed—mostly due to forestry cutting and regrowth. There was a 15 percent increase in the area that was developed during this 20-year period.

There was a 17 percent increase in the area that was developed. Over one-third of Delaware—an area equal to about half the Grand Canyon—is agricultural. This is especially noteworthy, considering the entire state is only slightly larger than the Grand Canyon.

There was a 19 percent increase in development. Over 31 percent of Florida is wetlands. Ninety percent of those wetlands are freshwater (over 18,500 square miles), with only 10 percent being saltwater marshes and mangroves (approximately 2,000 square miles).

Louisiana lost more than 160 square miles (over 100,000 acres) of wetland area to water during this 20-year period. Much of that includes the marshes that were impacted by Hurricane Katrina, which have yet to recover. Thirty-two percent of Louisiana is wetlands, and 25 percent is water, for a total of over 50 percent of the state.

There was a 10 percent increase in development. More than 2,000 square miles, or 23 percent of this state, is developed—more than double the average for coastal states.